Visitors 13
Modified 3-Feb-18
Created 17-Nov-13
18 photos
Hikone (彦根市 Hikone-shi) is a city located in Shiga Prefecture, Japan. It is on the eastern shore of the Lake Biwa. The city was incorporated on February 11, 1937. Hikone's most famous historical site is Hikone Castle. Its construction was begun in 1603 by Ii Naokatsu, son of the former lord, Ii Naomasa, but was not completed until 1622. Naokatsu's lands had been taken from him in the interval by the Tokugawa shogunate, and when his brother Naotake assumed control of Ōmi Province, he was able to complete the castle by collecting stones from the former Sawayama Castle.
When the Meiji period began in 1868, many castles were scheduled to be dismantled and only a request from the Emperor Meiji himself, touring the area, kept Hikone Castle intact. Today it remains one of the oldest original-construction castles in Japan. 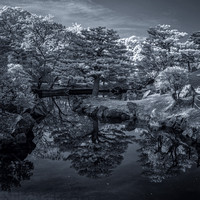