Created 26-Jul-17
Norway is a sovereign state whose territory comprises the western portion of the Scandinavian Peninsula and has a total area of 148,747 square miles and a population of 5.2 million.
Norwegian (norsk) is a North Germanic language spoken mainly in Norway, where it is the official language. Along with Swedish and Danish, Norwegian forms a dialect continuum of more or less mutually intelligible local and regional variants. These Scandinavian languages, together with Faroese and Icelandic constitute the North Germanic languages.
Norway is mostly made of hard granite and gneiss rock, but slate, sandstone, and limestone are also common, and the lowest elevations contain marine deposits. 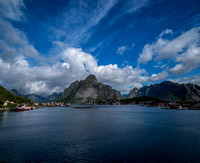